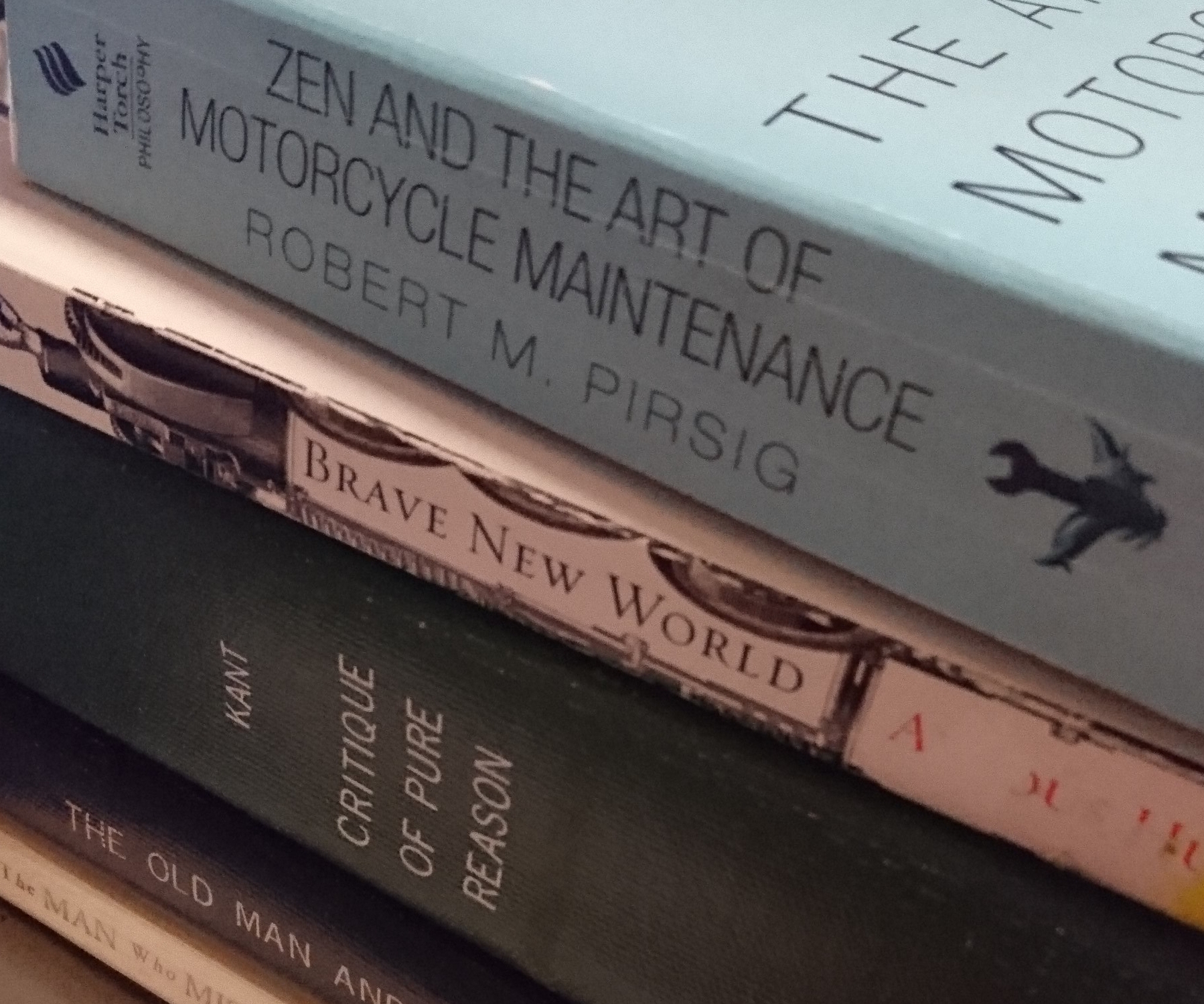 And by influential, I mean personally influential. These books were the ones that either set me on the trail of knowledge or imparted some grand idea that was connected with the theme of the year’s academic search.

This is the book that started it all for me this year. Aldous Huxley’s vision of a future utopia (dystopia for many) was both a page-turner and extremely interesting. In the book, the population is kept in basically an infantile state where they are always pleased and satiated by ‘big brother’, the World State and the 10 merciful world controllers. Drugs are used to fill the time between hedonistic pleasures, such as the inevitable outcome of, “everyone belongs to everyone else,” one of the hypnopaedic dictums of this Brave New World.

Choice quotes which I believe can bring about some deep discussion are the two that follow:

“And of course, stability isn’t nearly so spectacular as instability. And being contented has none of the glamour of a good fight against misfortune, none of the picturesqueness of a struggle with temptation, or a fatal overthrow by passion or doubt. Happiness is never grand” (265).

“Civilization has absolutely no need of nobility or heroism. These things are symptoms of political inefficiency” (285).

I have read this book twice now and learned more this second time. I believe it is one of those books that one can continually come back to and find new meaning in the interwoven narratives. His main takeaway is finding balance in all things (Zen) and the best move he does to accomplish this is through relinquishing his constant searching for truth, and enjoy the here-and-now with his son. I found the quote below inspiring:

“And I think it’s about time to return to the rebuilding of this American resource — individual worth” (461).

I mean, how can you disagree with something like that? I suppose by taking the side of removing the question, by arguing that we indeed have individual worth, or that we cannot rebuild worth if we never had it, but those questions fall short in the face of the achievements of Americans over the past 300 years (think about all that gumption) and the burgeoning tide of nihilism in the youth (inescapable debt, hyper polarized political scene).

This was my introduction to Dostoevsky’s work, and boy was it a good one. He and Raskolnikov, the protagonist, or antagonist, (it depends on the reader’s interpretation), had me reading for hours to try and figure out what was going to happen. Dostoevsky’s world and commentary on human behavior is striking, and the ideas carry over to the present. This book led me to Notes from the Underground, which did not fail to please either. It was another look into the depravity of an outcast and downtrodden man.

A poem on the topic of Crime and Punishment:

What is it to be human?

But we are all just animals;

Putting on a mask, hiding intentions,

The extraordinary pass such boundaries.

Another striking utopia (dystopia?) that this time pushes the question to its archetypal limit, “What if reason were to have sole reign over humanity?” Zamyatin paints a wonderful picture of a top-engineer and his struggle with his more humanistic side in a society where everyone is only a ‘number’.  I found the following quote rather interesting, as it is an aphorism that has the same moral foundation, but is placed in a different format by Zamyatin’s world building:

“The mps (motions per second) of the tongue must always be a little less than the mps of thought, and never the other way around” (10).

I wrote a whole essay on one passage of this book relating to the observer in a field of waves, much akin to the mathematical sense Zamyatin toys with in WE. If interested, follow this link to download a pdf. The essay is only 3 pages long double spaced, and analyzes the following quote (which I believe is rather an important concept):